Today has been good so far... aside from being in Walmart for 30 minutes rather than  just a few minutes.  If I walk for more than 10-15 minutes I get to a point where I can't walk anymore... and it happened during the time of day where I was feeling super faint.

The weather was AMAZING today though! It was 45 degrees when we left Walmart!!

This morning was a little rough to start out with... we finally got out to eat breakfast at Bagel Boy at around noon.  Then we went to Caribou Coffee to get my free birthday drink.  Then to Walmart so that I could shop for baby clothes and pick up a few things with a gift card we got for Christmas!  Walmart actually had a few fleece sleeper outfits for newborns unlike every other store in Sioux Falls.   After Walmart we came back home and we've just been hanging out here... Gage went to Sonic to get us a snack (we skipped lunch) because I had a freebie there too... and then he made me some Muddie Buddies!

Tonight we'll take Zoe to Cubbies and from there she'll be going to her Grandparents house to spend the night.  Gage and I will go to Olive Garden for dinner and then we might see a movie!

It's nice to get out of the house a little bit and have some fun.  The pain is still there though.  I've just been trying my best to ignore it today!

I saw this and thought it was pretty hilarious.  I then applied it to me right now... SUPER pregnant and almost always hurting so I almost always have a stressed out look on my face.  Really, I look terrible right now, haha.  I think that's why I thought this was so funny.  I wish there was a maternity version of it that I could wear today :) 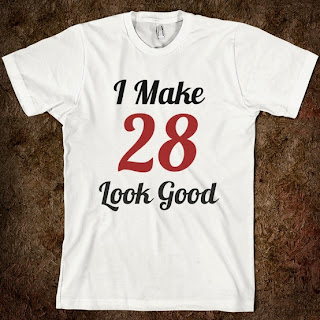