Maybe I'll add "blog more" to my resolution list?  I started my personal blogging about 12 years ago but I haven't really done much since Zoe's been born.  The only blogging I do now is over at ShainasDeals.com

I really would like to write more on this blog though.  I have a lot of plans for this blog eventually... it'll just take time to get it the way I want it.  At least I now have a title :)

The past few days have been extremely rough! 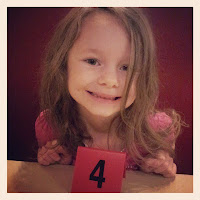 January 2nd would have been my Mom's 57th birthday.  I spent  much of the day wishing she was here... crying... wondering why she had to go so soon.   This year on July 9th will be the 8th anniversary of her death. I can't believe it has been that long.  I feel like it was maybe 2-3 years ago!  It was a challenging day as it always is... but I got through it.  Gage used his Groupon that I gave him for Christmas and we went to Zaroty for dinner.  Zoe was pretty excited about our order number.

January 3rd was Gage's birthday!  It was a day of ups and downs for sure.   I managed to get up after only 3 hours of sleep to make coffee cake but it was too late so we had to set it aside to eat later because I had an appointment with my midwife at 10am.   We went to the appointment and again.... 10am.  WORST time for me to be out and about.  That is the time of day every day that I start to feel like I'm going to faint.   I ended up laying on the bed in the exam room for an extra 20 minutes or so...sweating, pale, and breathing super heavy.  Lovely.  THEN I had the pleasure of getting two vaccines.  One in each arm.   The one in my right arm was a tetanus shot.  Yay....  I surprisingly didn't feel faint after the shots so we went to HuHot for lunch. My first time there... I was a bit confused and even moreso since I didn't have my glasses and couldn't read the board with the sauce recipes... the service was awful too.   The food was pretty good though so I think we will eventually go back there. Gage loves their food!  The rest of the day was spent hanging out at home until it was time to go to Famous Dave's for dinner with the rest of the family.   We celebrated both Gage's 27th birthday and Grandpa Whitt's 76th birthday.  It was fun and the food was amazing!! We really should go there more often.   Unfortunately I had to sit and grit my teeth most of the time because I was in * excruciating* pain.  By the end of the evening I really couldn't take it anymore and when we were leaving I was actually feeling dizzy from the amount of pain I was in.   Not good... 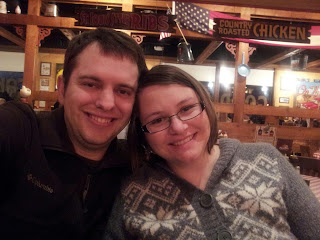 January 4th -  Pain and tears almost all day.  Much of the day was spent in bed.  I had to cancel my chiropractor appointment today because I wouldn't be able to climb onto the table for an adjustment. It hurt to sit, stand, walk...do anything other than lay on my left side.  I would be able to lay on my right side if it wasn't for my right arm hurting so much from the tetanus shot :-/  Once that gets better (in 2-3 days) I'll be able to sleep on that side again.  My left arm hurts too from the flu shot but not nearly as much as the right.  I really miss sleeping on my back.... but I really can't and shouldn't do that anymore.  It isn't good for me or the baby in many different ways.


The 4th also finally brought us some good news! Gage had two phone interviews and they both want him to come in for in person interviews next week.  Hopefully by this time next week he has a job!

So now we've made it to the 5th (it's 1:50am now so yes, it's the 5th even though I haven't slept yet hah).  I'm not sure what the plans are for today other than to try to get the house cleaned up.  I really can't do much of anything but Gage plans to do a lot of housework today.  I'll try and do what I can though! I'm so determined to get this house at least somewhat in order before the baby arrives.

I'm someone who wants the house clean all the time and the house has not been clean since we moved in (in October).  I'm physically incapable of doing the cleaning / organizing that needs to be done.  Thankfully Gage has been tackling laundry and dishes so we at least have clean clothing and dishes.  He even tackles the clutter every once in a while!  I'm reaching that "nesting" phase of pregnancy where I want to get everything in order and everything ready for the baby to arrive but I think I need to just accept the fact that I can't do most things right now and everything is just going to have to wait until baby gets here.