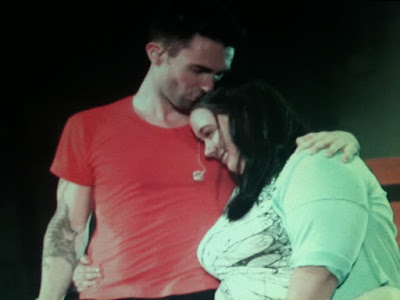 Ok. That's it. Next chance I get to go to a show with my friend Heather, I'm going!! :)  Do you know who that is in the picture? Yes, that is Adam Levine and that beautiful young lady is my friend Heather.

In order to fully understand the sheer awesomeness of this picture, you need to know a little bit of the history behind it.

/ Michelle Branch  show at the Roxy in Hollywood.  We had never heard Maroon 5 before but we had heard of them. They used to be called Kara's Flowers 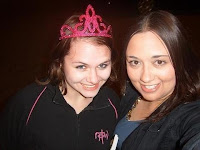 We were surprised to find our favorite band Hanson

there with us in the audience at that little show too! Needless to say, it was a very fun show. We were all so impressed with what we heard when Maroon 5 played that night.  They had such a different sound, Adam's voice was unique, the songs were super catchy, and we loved it.  From then on, we were fans; Heather especially. From that night on she went to every Maroon 5 show she could possibly get to.

She's been to 100+ shows now.  I know, sounds a little crazy right? She's not crazy. She's awesome! She just loves their music and when they do a show in the area or within driving distance, she just goes. That's just how it is with Heather!  She loves these guys and they love her, so she supports them!

Then I got out of that concert scene for a while and I ended up in South Dakota where there are no concerts.... okay, we have festivals. Not the same! I can't even imagine seeing Maroon 5 with more than 300 people at the show.  They have gotten so popular that now their concert tickets are over $100.  When we went to their shows before they were $13-$20.  I'm happy for their success as a band but bummed that there won't be small shows w/ them like that again!


Check out this amazing video from the Hollywood Bowl show on July 25, 2011! The part I'm showing you is at about 3 minutes and 30 seconds into the video. (Beware, there is some language in this video).

Isn't that SO SWEET? He brought her up in front of 10,000 people and proudly proclaimed her as their number one fan :) Have you ever seen a band do that for a fan before? I haven't.

At this point, I think M5 should just put her on a special guest list for every show. Free admission, always.

Email ThisBlogThis!Share to TwitterShare to FacebookShare to Pinterest
Labels: Friends