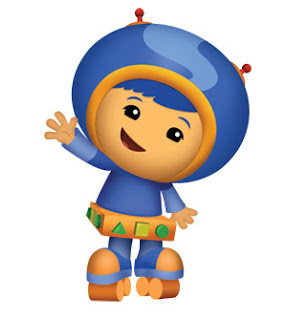 This is Geo. He is Zoe's best imaginary friend. She brings him with her everywhere. He is always with her. He is a tiny little boy, probably about 5 inches tall.

Geo isn't entirely imaginary. He's a character on a show called Team Umizoomi on Nick Jr. She LOVES this show! It is her favorite show. She watches it at least once a day.

The other night, she came up to me and said "Mommy! Mommy!" I replied, "What is it?" She whispered to me one little word, "Geo." Then she proceeded to giggle incessantly.  :)

Just saying the name Geo makes her blush. She loves this little guy! It is SO CUTE!

I just had to share this with you guys.  I think it's so cute. I wish they sold Geo plush dolls. I'm sure she'd carry that with her everywhere.  So far all they have is the show on DVD.  Maybe by Christmas time they'll have a plush doll? *crosses fingers*

Later this week we are going to attempt to make these:

It is a Geo sandwich... haha.  I have a feeling she is going to want to play with it more than eat it though!

Email ThisBlogThis!Share to TwitterShare to FacebookShare to Pinterest
Labels: Zoe