Travels, Deals, and an Organized Home!

My Dad and my Daughter.  This is not a sight I see very often! Due to the distance between California and South Dakota Zoe has only seen Grandpa Greg about 5 times.  I honestly didn't think she was going to see him until sometime next year.  Things changed last month when my Great-Grandmother (my Babicka - means Grandmother in Czech, pronounced Bah-beech-ka) passed away on October 10, 2010 (10/10/10).

Zoe and I flew out to Princeton, NJ for the funeral.  My Dad and several other family members flew out there as well. We spent a week out there and then drove back with my Aunt, Uncle, and Cousin - a 3 day trip. Altogether we were gone for 10 days. Traveling with a toddler is exactly how I thought it would be....difficult! It was a great trip though and I'll always remember it.  I doubt Zoe will remember but she had a great time visiting and getting to know family members she doesn't normally get a chance to see.

Since that trip I've kind of been in a hole... I have barely left my house.  I haven't really visited with anyone.  I think losing another family member has thrown me into another little battle with depression.  Granted, this time is much easier than when my Mom died.  Hopefully this will all be over soon.

On a much more hopeful note - I haven't just been sitting around doing nothing! I was overcome this week with the urge to organize! It all started with a simple re-arrangement of a couple pieces of furniture.  Now, I have an "office" in my bedroom that is organized, several organized closets, organized drawers, even the items under the bed are organized :)  I still have more drawers to work on in my room then it's onto the kitchen! 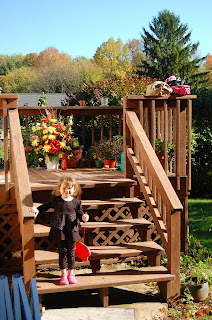 I've also been hard at work on my website - Sioux Falls Frugal Mom.  This week is by far the busiest week for bloggers like me.  I posted about over 100 deals this week, read through over 1,000 e-mails, spent about 40 hours in front of the computer, and still managed to get all my organizing done! I don't really know how I did it... I really haven't slept much this entire week.  Late nights and early mornings.  Things will slow down a little bit this week but it IS Christmas season which means a lot of people are looking for good prices on things right now so of all months for me to put extra effort into the blog, December is it.

Isn't that picture of Zoe adorable? It was taken right after my Great-Grandmother's funeral. We went back to her house to realize that we didn't have a key so we were waiting for someone to arrive that had a key. We just hung out on the steps for a while.  She loved Babicka's house. I sure hope she remembers it even a little bit!!